Asia’s major airlines are restructuring their operations and bolstering their finances to smooth the way for a return to profitability or at least gain some resilience amid a pandemic that shows no sign of letting up.

In the latest batch of financial results released last week, most of the region’s largest airlines by market value reported big net losses for the July-September quarter, with Singapore Airlines reporting a record loss of 2.34 billion Singapore dollars ($1.73 billion).

The red ink has wiped out shareholders’ equity and forced Singapore Airlines and other operators to go to their investors for capital infusions. As a result, total shareholders’ equity at 10 major airlines from Japan and China to Southeast Asia and India declined by about $8 billion from a year earlier.

Portions of the hefty losses in Singapore and Japan came from impairment charges, the result of restructurings. Since the early days of the pandemic, airlines have been hobbled by travel restrictions and forced to ground aircraft and lay off personnel. With prospects remaining bleak — the International Air Transport Association has said global air traffic will not return to pre-COVID levels until 2024 — the companies are beginning to fundamentally restructure their operations or downsize as they fight to survive the slow years ahead.

In announcing that it will remove 26 of its 222 planes, Singapore Airlines determined that the 26, including seven Airbus A380s, are “surplus to fleet requirements [of] the longer-term network.” This led to an SG$1.33 billion impairment charge on old aircraft.

ANA’s expected massive yearly loss is to include a 110 billion yen extraordinary loss as it moves to trim its fleet by more than 10%. Japan Airlines also expects an impairment charge on older jetliners in the second half of the fiscal year, the company said in its latest financial statement.

Impairments bring about big onetime losses. But writing down nonperforming assets reduces future depreciation, making it easier for companies to raise their profitability in the coming years.

“By restructuring to survive the pandemic crisis, we will greatly improve the next fiscal year’s profitability,” ANA President and CEO Shinya Katanozaka stressed at a midterm earnings conference on Oct. 27. 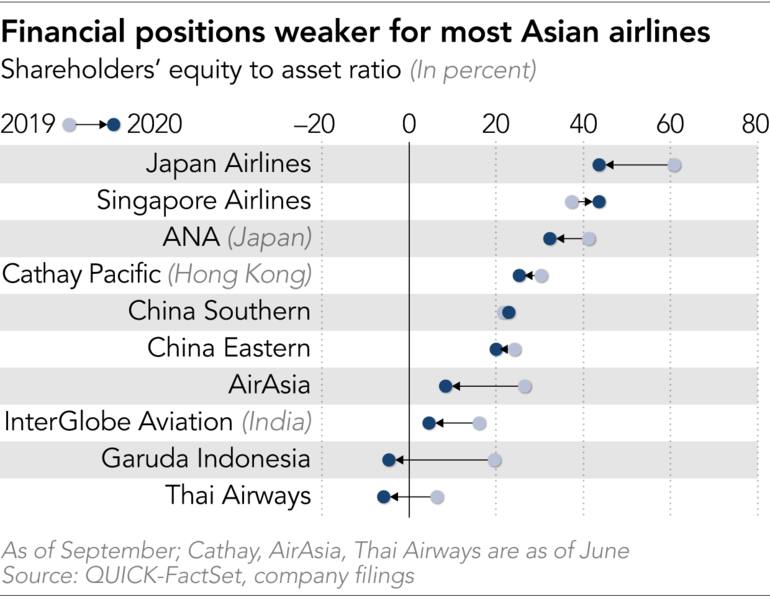 ANA and Japan Airlines have also revealed outlines of how their businesses will be structured in the years ahead. ANA plans to launch a low-cost carrier to fly international routes, while Japan Airlines will expand a similar budget carrier brand.

Early returns to profitability, however, are questionable. One Southeast Asia-based aviation analyst at a global brokerage said the write-downs will lead to lower losses next year but that attaining profitability will “boil down to vaccine effectiveness and distribution availability.”

Meanwhile, Chinese airlines are leading the way to recovery. China Southern Airlines, the largest state-owned carrier, returned to a net profit of 711 million yuan ($108 million) in the July-September quarter on the back of robust domestic passenger demand.

The latest quarterly results reveal not only healthier profit levels but also improved cash positions that will enable the carriers to weather the viral scourge and potentially invest in marketing to boost demand.

China Eastern Airlines, another big state-owned carrier, reported 9.1 billion yuan in cash and cash equivalents at the end of September, 6.7 times more than at the beginning of the year, as it was able to borrow 82.5 billion yuan, almost double its 2019 borrowings. As the core listed subsidiary of one of China’s so-called central companies — elite state-owned conglomerates directly under the control of the central government — credit seems to be readily available. Air China’s cash position at the end of September eclipsed that as of the end of last year thanks to a tripling in borrowings and a doubling of bond issuances during the period. China Southern also had a private share placement, enabling the Guangzhou-based carrier to raise 110.77 billion yuan, twice as much as in the year-earlier period.

Toliver Ma, an aviation analyst at Guotai Junan Securities, points out that the recoveries are “sacrificing passenger yield for passenger growth.” Airlines have introduced various “all you can fly” discount packages to capture domestic passengers that are boosting revenue but suppressing fares. As more flights and widebody aircraft will return to domestic routes, Ma said, “We expect that yield pressure will remain until international borders open.” That development remains up in the air.

It is a different story for Cathay Pacific Airways, which lacks a domestic market on which to fall back. On Thursday, the Hong Kong carrier announced it has renewed the employment contracts of 2,613 pilots and 7,346 cabin crew. The figures represent 98.5% of the pilots and 91.6% of the crew members who were not affected by the 8,500 job cuts at the end of last month.

Even after the latest restructuring round, Cathay is burning about 1 billion Hong Kong dollars to HK$1.5 billion ($129 million to $194 million) a month as it operates at less than 10% of pre-pandemic passenger capacity. Under its most optimistic scenario, the carrier expects to push capacity up to less than 50% at the end of next year. The pandemic has weakened the financial positions of most Asian airlines, according to shareholders’ equity to total assets, a yardstick that reveals a company’s financial health. As of September, it had dropped over 24 percentage points at Garuda from a year earlier. Japanese and Singaporean airlines are in relatively good positions, with readings around 30% to 40%, followed by China’s big airlines at around 20%.

Cathay in June agreed to a government-led rescue package of HK$39 billion in which it issued over HK$30 billion in preferred shares and other rights. Despite first-half net losses amounting to HK9.86 billion, the shareholders’ equity to asset ratio is at 25%.

Airlines based in emerging markets are worse off. InterGlobe Aviation, which operates IndiGo, India’s largest airline, marked a net loss of 11.9 billion rupees ($160 million) in the quarter through September, bringing its shareholder ratio to a marginal 4.6%, compared to 16.1% a year earlier.

Malaysia’s AirAsia and Thai Airways have yet to announce their earnings for the quarter. But considering their shaky positions as of June, they may be in urgent need of additional financial support.

Japan Airlines to raise $1.6b in share sale, restructure business amid pandemic pain

The negotiations are still ongoing and taking longer than the planned timeline, said Izham Ismail.