Hong Kong bankers and investors hope Ant Group’s huge initial public offering will crown a stellar year for listings — but they know it will be pivotal for the direction of the territory’s stock market and for China’s ability to rival U.S. exchanges as a place to raise money.

Hong Kong has shrugged off creeping political curbs by Beijing, tensions between China and U.S., and the coronavirus pandemic to reel off three dozen listings since the end of June. Nor is the flow at an end. Investment banks are sitting on what one described as the “best pipeline in the past decade.”

So Ant’s forthcoming dual listing, which at $35 billion is poised to be the biggest-ever IPO, is a moment to celebrate for Hong Kong, a top global venue for listings this year. Ant’s sheer size means it could have an outsized effect on market spirits — for better or worse.

“Ant is going to be a big party and after that usually investors take a short break, but I don’t think it will stop the IPO market here,” said Peihao Huang, head of equity capital markets for Asia at UBS in Hong Kong. But, he cautioned, “Ant’s aftermarket performance will impact market sentiment. While this year we have had strong openings, the recent increasing deal supply has meant some debuts have dropped. If that trend continues, the retail subscription levels will start to decline.”

A strong opening for Ant would lure investors thirsting for Chinese technology, health care and property management companies, as Hong Kong and the rest of the world remain flush with liquidity, bankers said. 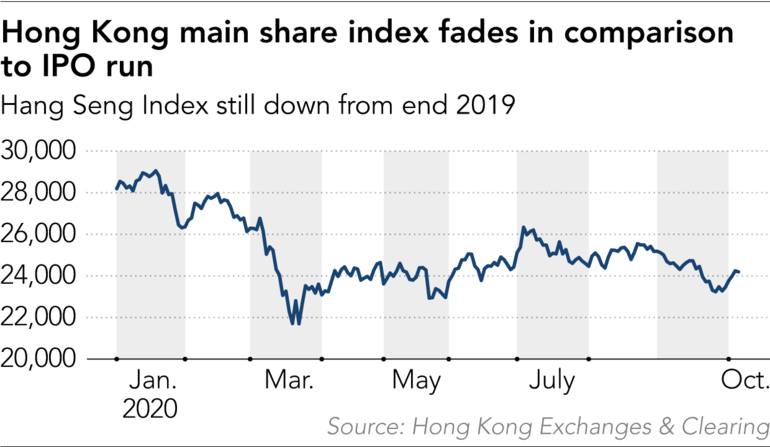 Conversely, any sign of a wobble could cut appetite for risk, especially given other uncertainties such as the U.S. elections, bankers and fund managers said.

While Ant is targeting an October launch for the IPO, it is yet to get the go-ahead from the Hong Kong stock exchange’s listing committee. Shanghai’s STAR market, where Ant will also list, gave its approval last month.

For Hong Kong IPOs worth more than $1 billion this year, the average time between filing the application and opening for subscriptions has been four months, according to stock exchange data. In 2019, it typically took at least three months to take orders. Ant filed its application on Aug. 25.

Hong Kong and the STAR market are vital for China amid Beijing’s deteriorating relationship with Washington. U.S. authorities are moving to block Chinese companies’ access to its capital markets. They are responding by making a beeline to home markets.

New listing volumes in Hong Kong and STAR touched $48 billion in the first nine months, compared with a combined $52 billion at Nasdaq and the New York Stock Exchange, data compiled by Refinitiv showed.

“The success of Ant Group’s IPO is a key component in Hong Kong and China’s bid to take on the major U.S. exchanges,” Philippe Espinasse, founder of consultancy P&C Ventures and former head of equity capital markets at Nomura.

He suggests the deal should be priced “so as to ensure not just short term but also sustained, positive aftermarket trading,” even if Ant and its bankers are keenly focused on getting the highest possible valuation. 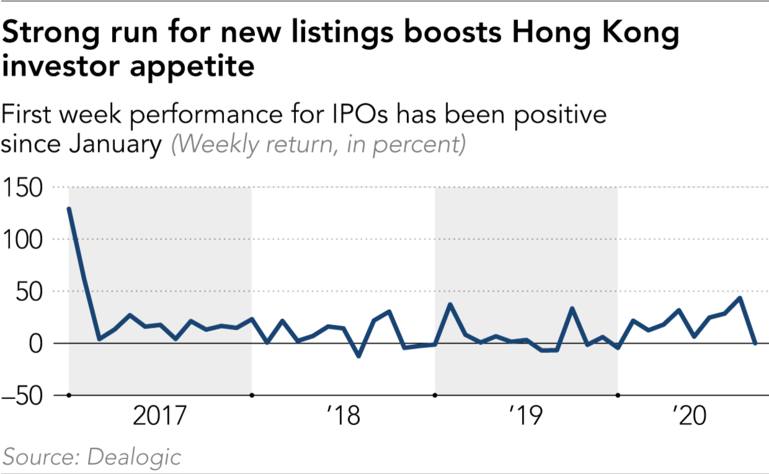 Listings in Hong Kong have had a positive run since February, based on the first-week performance after listing. September’s were the best first-week returns since February 2017, data compiled by Dealogic shows.

However, seven offerings — including Yum China, which operates KFC restaurants in mainland China — since mid-July have slipped below their listing price.

Ant, which was valued at $150 billion at its last fundraising in 2018, is eyeing a valuation north of $250 billion, according to people involved in the transaction.

Retail investors wanting to buy into Ant have sold liquid assets to build their cash buffer and line up financing. Almost 40% of Hong Kong residents invest in the stock market. This year their demand for listings has been so aggressive that companies had to repeatedly reduce the portion that institutional investors can buy.

Take the case of Max Cheung, a Hong Kong-based property dealer and an avid IPO investor. Over the past two weeks, he has sold shares worth more than HK$150,000 and lined up margin financing with his share broker to land at least a portion of Ant shares.

He is betting that a post-listing surge for Ant will outstrip the cost of holding cash and the margin financing interest until shares are allocated.

Hong Kong’s IPO calendar typically has a strong finish to the year. Since 2016, new listing volumes in the second half of the year have outrun the previous six months.

“At this stage, we see no reason for demand to diminish, given the clear abundant liquidity available in Hong Kong,” said Simon Weston, senior portfolio manager for Asian equity at AXA Investment Managers.

“As long as indications of Chinese recovery remain intact, and if stock markets can maintain at least some stability, then we would expect the high levels of interest to continue; obviously if we were to see sustained market weakness — for whatever reason — then this appetite would likely be depressed.”

While the run-up to the U.S. elections and fresh waves of the coronavirus pandemic in Hong Kong and rest of the world could ratchet up volatility and temper sentiment, investors such as Cheung are convinced Ant will deliver.

“It’s been a good run with IPOs this year for me,” said Cheung. “I’m sure everyone involved with Ant is conscious that it should not just be the largest IPO but also be a blockbuster post listing. I’m certain my bet will pay off.”

Ant has divided up the underwriting work among several banks such that no one firm has the full picture.

Ant Group aims to raise about $35 billion in a dual listing in Hong Kong and Shanghai's STAR Market, expected in October.