Photo by Jonas Leupe on Unsplash

Bank customers in Asia are swapping their wallets for smartphones, using apps for everything from buying groceries to sending money home from abroad to investing.

Need a loan? Forget filling out paperwork and waiting in line for a bank teller. Now you can apply for credit on your phone and receive an answer almost immediately, thanks to screening that uses artificial intelligence. Financial services are increasingly available anytime, anywhere.

Emerging economies, where many people still do not have access to banking services, are “leapfrogging” the traditional style of retail banking and jumping straight to digitized financial services. For a growing number of people, a visit to a brick-and-mortar bank seems old fashioned.

“I put 70% of my salary into my electronic money account,” said Bayu Wicaksono, a 23-year-old engineer living in Jakarta. Most of the things he buys he pays for with e-money from Ovo using his smartphone.

Ovo is an Indonesian payments service — and much more. Wicaksono uses his Ovo app to hail rides, purchase food and other items, send money to his mother and invest in financial products. His salary still goes into his regular bank account. But “if the upper limit [of about $735] on the amount of money that can be put into an e-money account were removed,” he said. “I would also want to receive my salary in e-money.”

Growth in e-money transactions in Indonesia is among the fastest in the world. E-money, including e-money cards, was issued 257 million times as of the end of September, according to figures from the country’s central bank. That is roughly a fivefold increase from the end of 2016. For comparison, banks have issued around 170 million ATM cards in total. 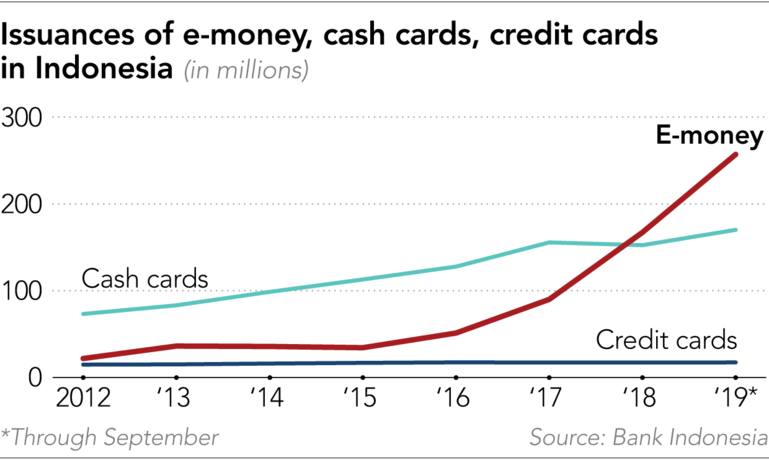 Bank customers in Indonesia often have to pay fees to apply for credit or to maintain an account. Not so with e-money accounts, which can be opened simply by downloading an app onto a smartphone and registering the phone number with the payment service.

Jason Thompson, Ovo’s CEO, said that Indonesia is about where China was in 2008 when it comes to e-money. But he thinks it will catch up in two to three years because fintech in Indonesia is growing at a breakneck pace. Thompson’s company has attracted 100 million users in the two years since it opened for business in 2017.

Ovo was the brainchild of the Lippo Group conglomerate and got its start as a payment method for the group’s department stores, shopping malls and other businesses. Now it has a partnership with Singapore-based ride-hailer Grab and Indonesian online retailer Tokopedia.

The company has won over consumers by expanding the number of places where its e-money can be used — both on and offline. Its aggressive rebates, which can be as high as 30% of the purchase price, are also a hit with customers.

According to U.S. market researcher CB Insights, Ovo has a valuation of $2.9 billion, making it the fifth-biggest unicorn in Indonesia. A unicorn is an unlisted startup valued at more than $1 billion.

Ovo has rivals on its turf. Indonesia’s GoPay has also expanded its network of online and physical stores. Dana, an affiliate of Chinese e-commerce leader Alibaba Group Holding’s Ant Financial, is also becoming a bigger player in the country.

In Thailand, TrueMoney, an e-money affiliate of conglomerate Charoen Pokphand Group, is grabbing a big slice of the market. Sea, a Singaporean company that operates online shopping and other businesses, has its own e-money offering in Southeast Asia called AirPay.

S&P Global, a ratings agency, points to e-money’s room for growth in emerging economies compared with conventional banking. The penetration rate for smartphones continues to rise, while the growth in traditional bank accounts is tepid. In developed countries, more than 90% of people have a bank account. In emerging economies the share is lower; in Indonesia, it is less than 50%.

There are also relatively few ATMs in emerging economies. This lack of financial infrastructure has spurred the growth of e-money in these economies. Smartphone apps have become a gateway to the financial industry’s future in Asia. The consumer credit market offers further evidence of the shift. Across emerging economies, fewer than 5% of adults have credit cards. Many young people who have just started working have difficulty getting them, even if they have a steady income.

Enter Kredivo, an Indonesian company that lets people buy now and pay later by borrowing money through a smartphone app. Unlike credit card companies, which decide whether to issue a card and what the credit limit should be based on the applicant’s age, occupation and annual income, Kredivo, which is operated by Singaporean company FinAccel, uses AI to screen borrowers.

Ovo and GoPay have started similar deferred payment systems. Ovo’s Thompson says the company has established a “risk scoring model” using huge amounts of data from e-money transactions. Ovo determines spending limits based on factors like how customers use e-money, where and how much. These tech-savvy companies are using AI and big data to challenge the experience-based models of conventional banks.

Smartphone-based financial services are also beginning to cross borders. In Singapore and Hong Kong, Indonesian and Filipino migrant workers queue up in front of remittance shops on their days off to send money to their families back home.

But with the rise of smartphone-based remittance services, such scenes may become a thing of the past. Singapore Telecommunications’ Dash app, for example, allows people to send money to Indonesia, the Philippines and Myanmar.

Conventional remittance services sometimes take several days to complete a transaction. E-money can be sent instantaneously. That is forcing banks to innovate to keep up. The Society for Worldwide Interbank Financial Telecommunication, or SWIFT, is rolling out a new system that can complete overseas remittances within 30 minutes among member banks. 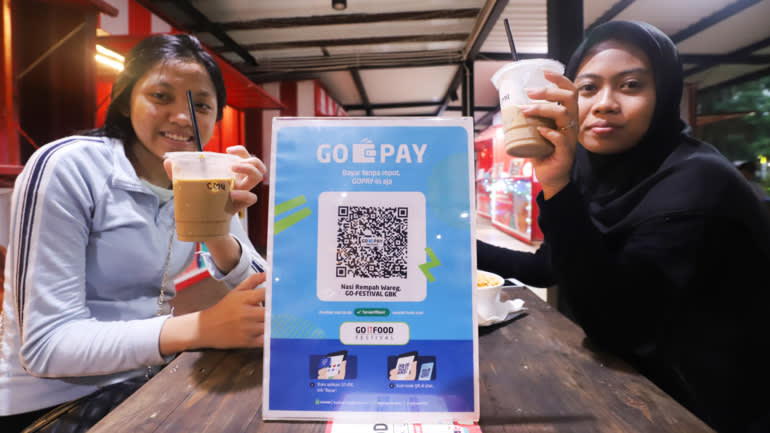 Transactions can be executed in dollars and the Cambodian currency, the riel. Customers do not need to open a bank account to use the service. To meet demand for remittance services from Cambodians working overseas, the National Bank of Cambodia has partnered with Thailand’s central bank and big banks in Malaysia.

Cambodia is a small country of about 16 million, and its economy relies heavily on labor-intensive industries such as garment manufacturing. Only about 20% of the population has a bank account and the country’s financial infrastructure, including banks and ATMs, is underdeveloped. Because the riel is unstable, dollars are used for many transactions.

Digital currencies are vulnerable to system failures and cyberattacks, but “developing countries, including Cambodia, can take on new challenges as they have few constraints,” says Hiroshi Suzuki, CEO and chief economist of the Business Research Institute for Cambodia. The country is in a good position to introduce digital currencies, as Cambodians have one or more mobile phone per person.

When Facebook in June announced plans to enter the financial services business with its Libra digital currency next year, governments and central banks in developed countries reacted cautiously. The Group of 20 big economies decided against greenlighting Libra for the time being, due to concerns over its potential to disrupt countries’ monetary policies, and fears about security and money laundering.

Given their diverging interests, developed and developing countries may clash over such new digital financial services.

This article was first published on Nikkei Asian Review.

OVO has already branched out into various other subsectors of fintech through partnerships and acquisitions.