Signing up a small business as a new customer would often take Banco Santander several days. As at other financial institutions, validating identity documents and corporate paperwork was time-consuming and costly for both bank and customer.

But today Spain’s largest bank can typically get this customer “onboarding” done in just 15 minutes.

The secret? The bank uses an artificial-intelligence-based document processing system deployed throughout its branch networks in Spain and Mexico. And unlike many AI tools, it comes not from an American tech giant but a young startup based in Singapore.

Taiger, named after the big cat but with a nod to AI in the spelling, specializes in document processing solutions, expert search engines for companies and industries, and conversational AI, typically in the form of chatbots. All are based on its ability to decipher written language. Taiger’s products are winning plaudits from customers.

“We tested AI products from some of those big tech houses but none of them has worked as accurately as we had expected,” a person at Santander told Nikkei Asia. “But Taiger is delivering over 90% average accuracy.”

Here, “accuracy” means the rate at which the system recognizes bits of data in a document. If a document contains 100 pieces of information that need to be found, Taiger’s system correctly identifies more than 90 of them on average, in Santander’s case.

Recently Taiger also won work from a large Spanish paralegal service provider that had been using a system based on IBM’s Watson AI engine but decided to replace it with Taiger’s document extracting system.

“We are typically beating big guys in new project wins,” said Sinuhe Arroyo, Taiger’s founder and chief executive. Arroyo, 46, was born in Spain and recently naturalized as a Singaporean citizen.

DealStreetAsia, a Nikkei-affiliate covering Asian capital markets, categorizes Taiger as a “soonicorn.” That is a startup approaching the $1 billion valuation that marks “unicorn” status.

If Taiger succeeds in becoming globally competitive, it will not only have a good chance of growing into a unicorn but also of being counted as a world leader in an emerging field of hybrid AI technologies. That would set it apart in Southeast Asia, which is lagging in nurturing deep tech startups. 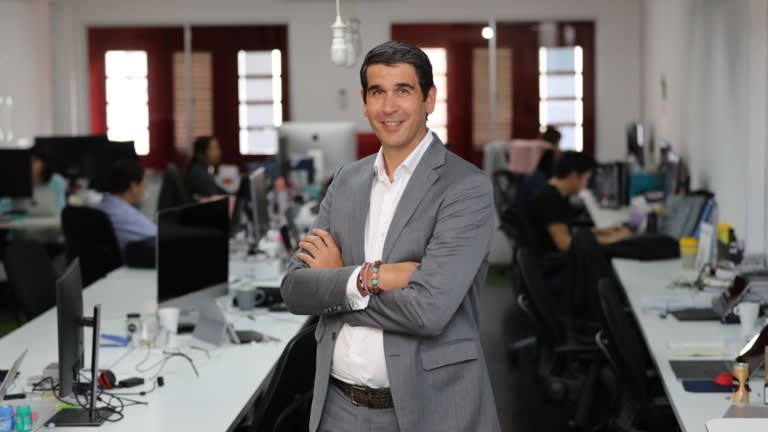 CEO Sinuhe Arroyo founded Taiger in Austria in 2009 and reincorporated in Singapore in 2016. (Photo by Akira Kodaka)

Extending its reach, Taiger entered a global co-marketing partnership with Microsoft last fall. Now Taiger’s products are on the list of business applications available on the Azure cloud-computing platform, where Microsoft acts as a sales agent.

And at home the Singapore government is a big fan of Taiger, originally founded in Austria in 2009 as a search engine provider and reincorporated in the city-state in 2016.

Singapore’s Housing Development Bureau, which builds and provides housing for tens of thousands of citizens every year, uses Taiger’s chatbot to communicate with customers. A few dozen other ministries and agencies use its chatbots, search engines, document processing or other solutions.

Arroyo believes big-tech products today often fail to meet customer needs because they are too dependent on a mainstream methodological principle of AI called machine learning or statistical AI, which tries to find meaningful patterns in a large amount of data.

Interest in machine learning accelerated in the early 2000s, due in part to the availability of ever faster logic chips, AI systems using deep-learning algorithms started beating humans in such games as Jeopardy and Go. That led to a boom in the development of commercial applications using deep learning — to the extent that many people treat AI and machine learning as synonyms. After the AlphaGo system developed by Google-owned DeepMind of the U.K. defeated the European Go champion in 2015, the public started associating “deep learning” with AI.

But machine learning, including deep learning, is only one AI methodology and has some weaknesses. It typically requires a massive amount of uniformly formatted, carefully curated data to find meaningful patterns. For businesses this is hugely time-consuming and often makes AI impossible to put to practical use.

“Automation [based on machine learning] tends to be incredibly labor-intensive today, in a way that really just doesn’t work for the problems we want to solve,” said David Cox, director at MIT-IBM Watson AI Lab, in an online seminar last summer. “And for the vast majority of the problems we face, actually, we don’t have those giant rivers of data.”

Even if a machine learning program can be fed with vast amounts of data, it often fails to “understand” the meanings of specific types of information it is looking at because it lacks basic knowledge or common sense.

For example, a machine learning system is very good at finding commonalities in hundreds of facial images of a single person. But it is not good at working with documents where there are no standardized formats and where the same word can have different meanings in different contexts.

In terms of what a bank might need from a new business client, for example, some companies will put an invoice number at the top left corner of a page, while others will put it top right. The format of a letter granting power of attorney can vary wildly, even within one organization. Passports and ID cards vary greatly from country to country.

The list of potential snags is endless: Some automation systems cannot distinguish telephone numbers from invoice numbers; tell Paris, Texas, from Paris, France; or work out whether “carpenter” is a surname or a job title. 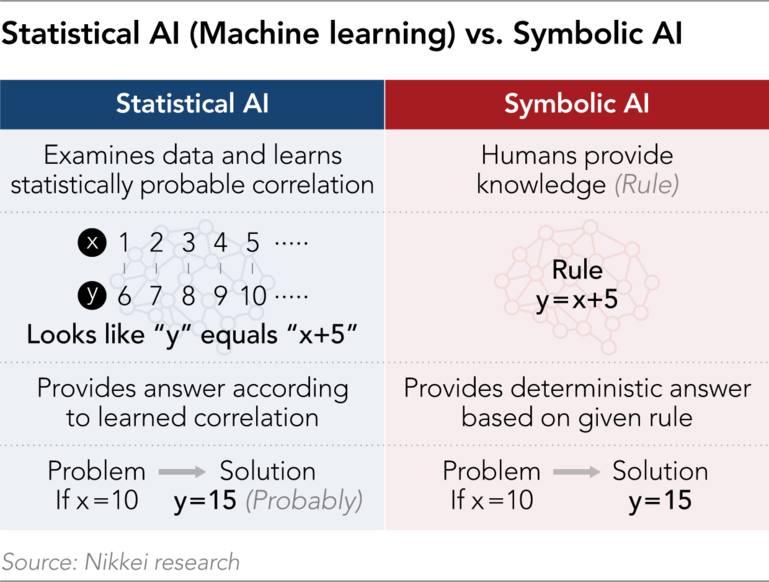 This is where Taiger takes a different tack. Arroyo believes the core strength to its technology lies in its ability to understand words and other data points based on the other main approach to AI, which is symbolic. “Combining those two major methodologies, ours is a hybrid AI,” says Arroyo, who has a doctorate in an AI subfield called semantic technologies.

Symbolic AI treats data as inputs to be processed using rules or programs determined by humans — just like other computer software — and written with mathematical and linguistic symbols, hence the name.

That is the opposite approach to machine learning, which first looks at data and then finds patterns.

Programs in a symbolic AI system can be designed to refer to various libraries of information — common words in various languages, different meanings of a word in different contexts, technical terms and jargon, names of people and places, or relationships between concepts and words — to determine the meaning and nature of a piece of data.

For example, when we say, “There are two teachers in the classroom,” the word “teacher” represents an individual, who works as a teacher. But when we say, “Tom wants to become a teacher,” the word represents a profession, not an individual. In a symbolic AI program, knowledge of these different meanings in different contexts can be pre-taught before looking at the data.

Taiger builds a template for the specific documents used in a particular industry, such as powers of attorney, incorporation registration certificates, invoices and so forth. Users then customize those templates by inputting words and concepts frequently used by their company or industry.

At the heart of such models is a field called Knowledge Representation and Reasoning, which deals with how to equip machines with knowledge and common sense about things, concepts and their relationships.

One subfield is semantic technology, which uses what is known as ontology engineering to build machine-readable sets of knowledge, or ontologies, about a topic, be it dogs, computer languages or Spanish commercial law. 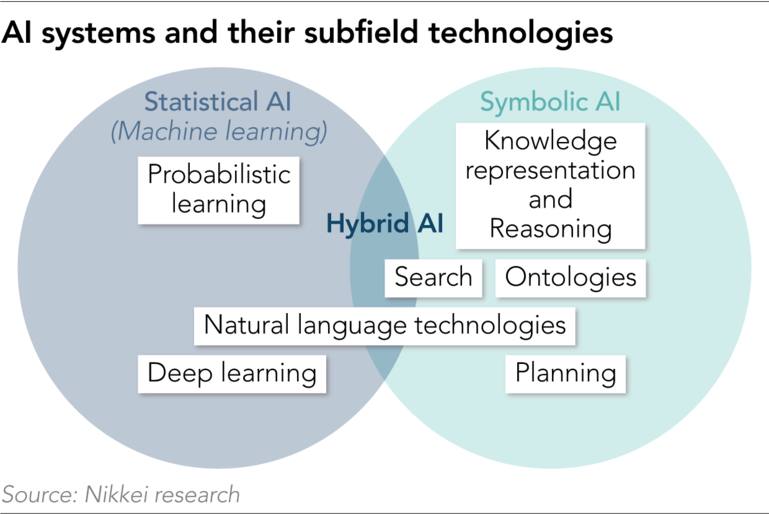 There are open-source ontology collections on the web, including Linked Open Data. Taiger’s products are deployed using both publicly available and locally built ontologies.

Of course, Taiger is not the only company that develops hybrid solutions combining symbolic and statistical AI methodologies. In fact, a growing number of top AI experts advocate this approach.

The MIT-IBM Watson AI Lab itself is advocating the hybrid approach, which led IBM to develop a new technology platform dubbed “neurosymbolic AI,” in which “neuro” represents the machine learning approach.

“The number of vendors in the natural-language market has exploded in the last few years,” said Anthony Mullen, a senior director analyst at Gartner, which listed Taiger as a vendor in its “Hype Cycle Report on Emerging Tech” last summer. He said the consultancy is aware of more than 3,000 companies operating in the field of “conversational AI,” which builds chatbots and similar interactive communication tools.

He noted a growing common understanding in the industry that “the hybrid AI approach is the more complete approach to natural-language automation.”

In a landscape that is rapidly growing more competitive, Taiger is ready to go global. In its previous Series B funding round the company raised $25 million, achieving an estimated valuation of $110 million. It is now in working on Series C fundraising, hoping to pull in “a significant amount,” said Arroyo, “in order to tackle the U.S., Japan and other major markets.”

In October, Taiger released a Japanese-language plug-in so that its products can handle documents written in Japanese-language scripts, ahead of its entry into the Japanese market, where demand for digital transformation in government agencies and companies alike is surging amid the COVID-19 pandemic.

Arroyo chose the name of the company because he was born in the Chinese year of tiger. While 2021 might be the year of the bull, the animal he prefers to associate with the optimism he feels for his company is the rabbit — jumping ahead as AI continues to develop.

“We are ready to leap across the globe,” he said.

David Padget will be the chief commercial officer of TAIGER.

The fresh investment values the company at $110 million.