Photo by Nick Fewings on Unsplash

Low-profile Southeast Asia has gained the attention of venture capitalists from other parts of the globe where trade fracases are slowing commerce. In the first seven months of this year, VCs collected $2.62 billion in commitments for the region’s unicorns and other promising startups.

The trend is part of an overall deal-making boom in the region. Southeast Asian companies bagged investments and inked mergers and acquisitions worth a grand total of $15.18 billion between January and July this year, DealStreetAsia data shows.

The investments include capital infusion in the region’s privately held companies by private equity, venture capital and corporate players.

Singapore led the charts, accounting for 30.7% of total deal value during this period. Thailand came in second at nearly 25% on the back of Thai lender Siam Commercial Bank’s $3 billion sale of its life assurance business to Hong Kong’s FWD.

Indonesia rounded off the top three at 19.6%, helped by a frenzy of startup deals in the first seven months of the year. 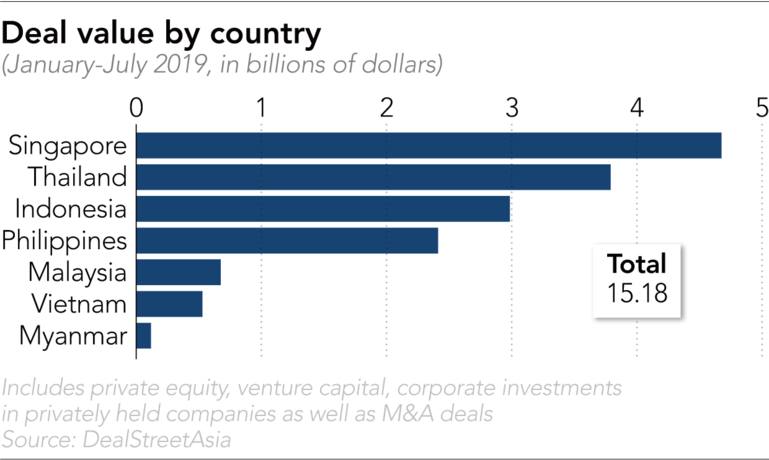 With the region’s unicorns continuing to raise large funding rounds, the 2019 tally is likely to match last year’s total. Singapore-headquartered ride-hailer Grab is set to raise another $2 billion to finish a $6.5 billion Series H fundraising spree that started last year.

This year, the decacorn has disclosed raising over $1.76 billion — $1.46 billion from SoftBank Group and $300 million from investment manager Invesco — as part of the Series H round. It has also raised $200 million separately from Thai retailer Central Group.

Anthony Tan, Grab co-founder and CEO, has also confirmed that the company is weighing the spinning off of its payment and financial services arms. This would allow strategic backers — Ant Financial and PayPal have previously been rumored to be interested — to invest in these units directly.

Grab rival Go-Jek is raising over $3 billion as part of a Series F round, of which it is thought to have so far gathered over $1.6 billion. DealStreetAsia has earlier reported that the startup intends to keep its funding doors open for the near term and could end up raising as much as $4 billion.

So far in 2019, Southeast Asia’s startup success stories are not merely unicorn-driven.

In its H1 2019 report, venture capital firm Cento Ventures noted that about 50% of total tech investments in Southeast Asia in the first half of the year were accounted for by mega-deals that typically involve the large unicorns, down from 70% in 2018.

The region has its share of near-unicorns, or privately held startups with a valuation just shy of the vaunted $1 billion mark. This list includes Vietnamese payments startup VNPAY, which recently secured an undisclosed investment — DealStreetAsia has reported a $300-million total — from SoftBank and Singapore sovereign wealth fund GIC Pte.

The league of the near-unicorns also includes on-demand video streaming company iflix, which is eyeing an IPO on the Australian stock exchange at a $1 billion valuation. Others knocking on the doors of the region’s unicorn club are fashion marketplace Zilingo, which is valued at about $970 million and seems to have caught the fancy of SoftBank’s Son, and mixed martial arts startup ONE Championship, whose global ambitions landed it in the U.S. this year.

There is another growing list of slightly mature startups that seem to be attracting capital in the region.

“Although the majority of capital will likely continue to be associated with a few familiar names, we also observe a growing cohort of other late-stage companies who are raising larger rounds, putting them above the $100 million valuation,” Cento Ventures said in its report.

Within this cohort, a majority are headquartered in Singapore and Indonesia, and e-commerce and fintech stand out as dominant themes. However, other sectors such as hospitality and enterprise software are also drawing increased investor interest.

Searching for the next unicorn and the promise of generous returns, VC firms continue to raise larger funds in this part of the world.

In the first seven months of the year, VCs with an interest in Southeast Asia amassed as much as $2.62 billion in capital commitments to top last year’s total of $2.12 billion.

There are also funds with a complete or partial focus on Southeast Asia that are in the market to raise over $3.7 billion. While most of these funds are targeting investments in multiple markets, the fundraising spree indicates high investor confidence in Southeast Asia’s startup ecosystem. These are early days yet for the region’s private equity ecosystem, but opportunities are starting to emerge.

“The depth of capital still remains quite thin for SEA,” said Warburg Pincus managing director and Southeast Asia head Jeffrey Perlman. “With that being said, we are starting to see more interesting opportunities in the region and more capital that is starting to flow into the region.”

Warburg was one of the early backers of Go-Jek and Trax, a Singapore-headquartered retail solutions unicorn. In June, it announced a $4.25 billion fund for China and Southeast Asia. It is the first time Southeast Asia has been a focus for a Warburg fund.

Among Southeast Asia’s markets, Indonesia and Vietnam have emerged as investor favorites.

“Investors will be increasingly focused on the fastest growing markets in SEA which are sizable and have a young and emerging middle class,” Perlman said. “Vietnam and Indonesia certainly stand out in that regard and my sense is capital will continue to flow disproportionately to these markets.”

“The potential is limitless with regards to the opportunity to harvest the country’s population bonus,” said Melissa Irene from East Ventures. She points to opportunities in sectors that have a large young, middle-class consumer base (think coffee chains or e-commerce) and those that seek to bring about a digital transformation in traditional sectors (education, logistics, property and healthcare).

Indonesia’s government, which has so far let the startup ecosystem evolve on its own, is actively trying to entice investors with more friendly policies.

In July, the Joko Widodo-led government rolled out corporate tax breaks to encourage investments and incentivize research and development.

Neighbouring Vietnam has the advantage of producing a more diverse set of startups. Homegrown private equity firm Mekong Capital partner Chris Freund notes that the country has something to offer to investors of all kinds.

“There are more and more startup companies for seed stage and early stage investors, there are fast growing companies for investors like Mekong Capital and there are mature businesses that are stable but still growing, which are suitable for larger global funds,” he said.

Deal sizes are small in Vietnam, concedes Brian Chang, a partner at private equity firm EQT Partners, but “the market is growing so fast.”

“A company that is small today may not be small in two years’ time and we want to be well positioned then,” he said.

The country’s investor-friendly government recently inked an agreement with regional and global VC firms to invest a total of 10 trillion dong ($425 million) in local startups over the next three years.

According to Refinitiv data, Chinese VC investments in Southeast Asian startups grew more than eightfold year-on-year to $1.78 billion in the first seven months of this year. Chinese concerns had invested a measly $208.6 million in comparison in the same period last year.

“We’re seeing quite a bit of new capital coming in [in Southeast Asia] — there are local VCs who have done very well — and we also have new venture capital, whether it’s from China or the U.S. looking for the next growth wave,” GGV Capital managing partner Jenny Lee said at a recent DealStreetAsia event.

Earlier this year, GGV Capital opened an office in Singapore, its first in Southeast Asia and fifth globally, to tap opportunities in the region. The firm, which has over $6.2 billion in capital under management across 13 funds, was an early investor in Grab.

The ongoing U.S.-China trade tensions might benefit Southeast Asia as investors look for alternative avenues to diversify risks. Some investors feel that Southeast Asia could be the net beneficiary of geopolitical tensions around the world.

“The conflicts between China and the U.S., Korea and Japan, Germany with Europe, and U.K. with Brexit are not just affecting two countries but are creating disruptions across multiple economic areas. I think that Southeast Asia will be a net beneficiary of these disruptions because of its low profile and well-established supply chain and advanced manufacturing capabilities,” said Kyle Shaw, founder and managing partner at Hong Kong-based private equity firm ShawKwei & Partners.