Employees of Traveloka are seen working at the company's headquarters in Jakarta, Indonesia. Photo: Reuters

When Dita Listya is planning a holiday, looking for a stylish hair salon, or just hoping to kill a couple of hours, the 27-year-old Jakarta resident turns to the same app: Traveloka.

“I use Traveloka to compare the prices of hotels and air tickets when I travel,” Listya said, but also “to find ways to have fun in Jakarta” on weekends. One of her favorite pastimes is playing virtual reality games at a mall with her friends, especially one that lets her become a robot and save a city.

For Traveloka, one of Indonesia’s four “unicorn” startups valued at more than $1 billion, Listya may be the ideal customer.

Users like her, who rely on the app not just to arrange trips but also to enjoy life close to home, are crucial to the startup’s strategy for turning a profit. And turning a profit seems critical for pulling off a successful initial public offering, given the swelling stock market backlash against multibillion-dollar ventures like Uber Technologies and WeWork that burn through cash with no black ink in sight.

Traveloka, too, is “still in growth mode,” President of Traveloka Group Operations Henry Hendrawan said in an interview with the Nikkei Asian Review, explaining why the startup continues to make losses like many other global unicorns.

For years, the company has dangled discounts to build market share in fast-growing Indonesia. However, Hendrawan believes a suite of lifestyle services launched in June will reduce its reliance on cheap deals and set it up for an IPO in “two to three years.” 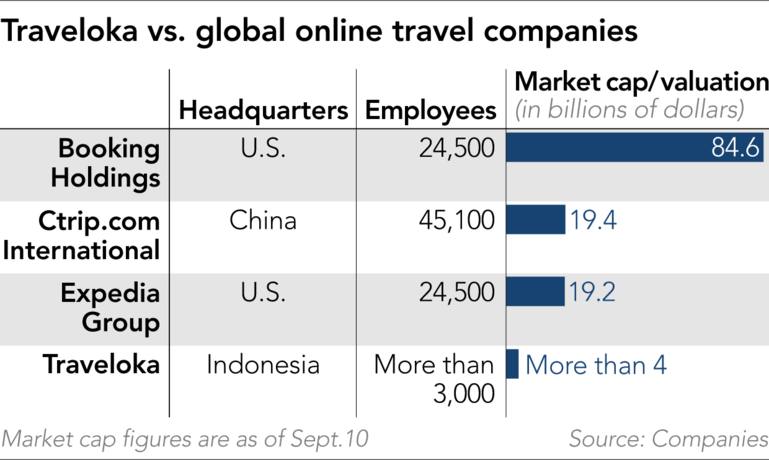 Established as a flight aggregator in 2012, Traveloka quickly shifted to offering airline and hotel bookings on its own. Indonesians, particularly millennials, have broadly embraced it: One survey by local research firm Alvara Strategic found Traveloka was by far the most popular booking app, with 79% of nearly 1,200 respondents being regular users. Rival Tiket.com attracted 8.9%, while Tiket’s parent, Blibli.com, mustered 5.6%.

Traveloka has also moved into neighboring markets like Thailand, Vietnam and the Philippines, and reached Australia in February. Big investors have fueled this expansion, including Singaporean sovereign wealth fund GIC, which led the latest $420 million funding round in April, and U.S. online travel player Expedia, which pumped in $350 million in 2017.

Hendrawan revealed the company is in talks with other potential strategic and financial partners.

He attributes Traveloka’s success to its focus on the needs of Indonesians and Southeast Asians. While many other travel platforms have been in the business longer, such as Expedia and fellow U.S. giant Booking.com, he said “they treat Asia only as a destination [for Westerners], like Americans going to Indonesia’s resort island of Bali.”

Payments are a prime example of how it has tailored its services to the local market. While most travel sites take credit cards, fewer than 5% of Indonesians have them. So Traveloka offers various other options, including bank transfers and payments at convenience store chains like Indomaret.

In June 2018, the company started PayLater, an online installment service that requires no credit card. Hendrawan said 500,000 customers have used it so far.

“There is a huge need for consumer loans,” he said, noting that many Indonesians arrange trips just two days before departure. The last-minute bookings are “not because Indonesians are impulsive,” he said, “but because they don’t have working capital and a credit system.” PayLater lets them book earlier, ensuring they have access to “the best prices or inventory for their travel.”

It was the lack of traveler-friendly services in Indonesia that motivated Traveloka’s founders in the first place. Ferry Unardi, the company’s co-founder and CEO, used to be an engineer at Microsoft and was constantly frustrated by the difficulty of finding affordable, convenient flights between the U.S. and his hometown of Padang.

After leaving Microsoft, Unardi enrolled in Harvard Business School but dropped out after a semester. He later recalled, at a 2014 startup event in Jakarta, that the e-ticketing industry was just taking off in Indonesia, with companies like Tiket.com securing funds. He and his partners had feared it was a now-or-never moment.

Soon after launching Traveloka as a flight search tool, Unardi realized it would be natural for customers to book tickets on the same platform. Hotel reservations were the logical next step.

The company is quite a few steps beyond that now. 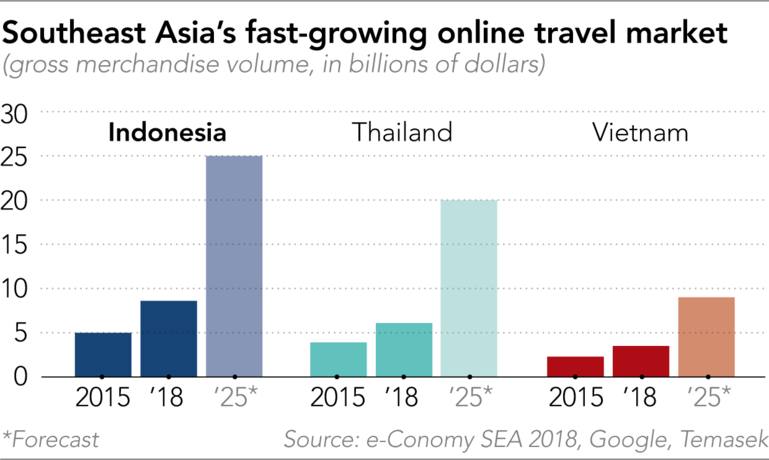 Its new Traveloka Xperience brand covers a range of 15,000 activities and services, some of which Southeast Asian users can enjoy in their own cities. They fall into 12 categories, including movies, playgrounds, beauty and spas, and events.

“Your lifestyle moment is not only when you are traveling out of the city or the country. It actually happens every weekend,” Hendrawan said. “We don’t consider ourselves an online travel agency anymore. We are a travel and lifestyle platform, proposing discovery and inspiration.”

Although Traveloka still offers some discounts, it also provides other types of perks, such as the right to skip the line for an event.

Many companies in the travel industry are pushing “experiences,” from vacation rental platform Airbnb and SoftBank Group-backed activity startup Klook to budget carrier AirAsia. But these are geared to filling tourists’ itineraries when they go abroad, Hendrawan argued. “No one is trying to address local experiences for local people.”

Lifestyle services, the thinking goes, will encourage users to open the app more regularly. “Every travel brand is trying to increase the frequency of its app usage, since travel is such an infrequent purchase,” said Yeoh Siew Hoon, founder of online travel media WiT. “Giving its customers more reasons to return and book products is key to building repeat business, loyalty and, hopefully eventually, profitability.”

This might help Traveloka persuade investors who are reluctant to keep throwing cash at startups that struggle to actually make money, especially now that the global economy is looking shakier.

This year has been a tough one for some of the biggest names on the startup scene. The We Company, owner of office-sharing service WeWork, has slashed its target IPO valuation to around $20 billion — less than half the figure after its last private funding round. Tepid investor interest has even seen its largest shareholder, SoftBank, urge the company to shelve the share offering, the Financial Times reported on Tuesday. The startup has already taken in more than $12 billion since it was founded nine years ago but has never made a profit and suffered a $690 million loss for the first six months of 2019.

Similarly, ride-hailers Uber and Lyft have both fared poorly in trading after their IPOs, in the absence of concrete plans for posting profits.

“The justification of valuation is a big challenge for any technology startups,” but especially for travel technology companies, “the largest category of the internet economy in Southeast Asia,” said Phocuswright’s Kapoor. “Startups are raising capital and way too many companies are choosing growth over profitability.”

Traveloka is eager to show it is different as it prepares for its own IPO. “We see [going public] as ultimately one of the milestones we need to explore seriously,” Hendrawan said.

Even one of its domestic competitors feels the change in Traveloka’s strategy. “Now they do discounts much less than before … and this makes a lot of sense,” said Tiket co-founder and chief marketing officer, Gaery Undarsa. “They wanted discounts when they were growing, but once their business got big, they do much less.”

But the push into lifestyle services pits Traveloka against not only other travel startups but also “superapp” providers like fellow Indonesian unicorn Go-Jek, which is valued at over $10 billion. The ride-hailing company offers GoLife, an app that lets users book everything from house cleaning and car washes to massages and hair salon appointments.

The superapps, meanwhile, are expanding into the travel sector. In May, Go-Jek partnered with Tiket, making it possible to pay for discounted travel with its GoPay e-money. Singapore’s Grab now offers accommodation through partnerships with Agoda and Booking.com.

Hendrawan denied that these superapps pose a direct threat, insisting that their engagement with customers is “very shallow” and that using Traveloka is a different, deeper experience. “Our lifestyle product is not a utility,” he said, stressing it encourages users to browse and discover new things. “After the transaction, you want to share that experience.”

A Traveloka investor echoed this argument. “Clearly, the user profiles of ride-hailing and travel are in a different spectrum,” said Willson Cuaca, managing partner of East Ventures, a venture capital that invested in Traveloka in its first year.

If travel is a rare high-value purchase, ride-hailing is a frequent low-cost one. As a result, Cuaca said, “Ride-hailing users have no loyalty to the brand but they are loyal to the discount,” unlike travelers who are “loyal to the brand that serves you well.”

“I keep using Traveloka for VR games,” she said, “because there is always a 50%-off promotion.” This article was first published on Nikkei Asian Review.

The investment in KiotViet is being made through Jungle Ventures' third Southeast Asia fund.

Traveloka said to seek $500m in fresh funding at $4.5b valuation: Report

The investment is reportedly expected to close within the next two months.